If you geek out over technology, gadgets, and digital trends but missed this year’s Consumer Electronic Show (CES), you’re in luck! Brad Griffith of Buckeye Interactive attended the show and has once again reported back about everything he saw, heard, and experienced at this year’s exciting event! You can actually watch his entire Talk through the Facebook live stream video, or you can access his presentation, and check out some of the photos he shared with us. 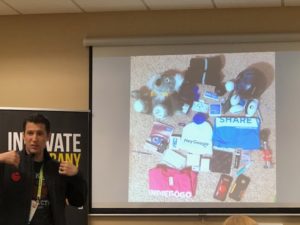 Owned and produced by the Consumer Technology Association, CES was held in Las Vegas from January 8-11 and is the largest technology trade show in the world. The show covered nearly three million square feet and hosted more than 4,400 exhibitors, 1,200 start-ups, and 180,000 attendees.

Brad shared the CES show map of the three tech venues along the strip — Tech South, Tech West, and Tech East (convention center) — and a grid of exhibitors so TIGER Talk attendees could get a sense of how massive the technology trade show was. Brad said the show was a mix of experiments, distribution deals, forward-thinking early adopters, and all kinds of promotional items.

Brad shared photos of some of the products he saw, and he said they fell into the following categories:

CES 2020 is scheduled for January 7-10 in Las Vegas. You can learn more about the show, sign up for CES updates, or register for next year’s event on CES’s website. If you’d like to talk tech with Brad about the products he saw, contact Buckeye Interactive at 614-289-7900 or visit their site!

Your Questions • Our Experts
Private Appointments